Barthes describes photography as “that-has-been” or the “Intractable” (hard to control or deal with) (77). Images that would have been taken may have been monumental (like monuments) of person, time, place, but as photography became/becomes more accessible, it becomes more visible, or things, people, and places do as we photograph them. He goes on to say that in our daily flood of photographs (and this having come out in 1980, situate that in time now to the nth degree), the forms of interest photographs provoke may be experienced with indifference as a feature that goes without saying (77) – causing an almost skimming of the photographs we encounter, only pausing when punctum pricks our attention. He describes this submitting to the flatness of photography through likening the action to the camera lucida, an apparatus that allowed drawing an object through a prism, from the eye’s viewpoint as “the essence of the image is to be altogether outside, without intimacy, and yet more inaccessible and mysterious than the thought of the innermost being; without signification, yet summoning up the depth of any possible meaning; unrevealed yet manifest, having the absence-as-presence which constitutes the lure and the fascination of the Sirens” (quoting Blanchot 106). Reading this, I couldn’t help but situate this within the web, though image/photograph heavy in its design/function/use, focused more particularly through image-centric sites such as FFFFOUND!, Tumblr, Pinterest, Flickr, etc. How does the web shape punctum in these galleries of “Save Image As” or share with _________? Does the screen operate as a camera lucida? How does (or doesn’t) “intractable” take on new meaning in digital spaces, particularly regarding origin/source of the “that-has-been” (but-from-where)?

Summary:
Barthes explains Photography as that-has-been, as representation – not Photography of just an image, but a just image (justesse) – that authenticates the existence of a being in Time, that in that moment, is reversed to photographic ecstasy (the nostalgia and certainty the photo elicits in that it is evidential and exclamative (113)).

“I remember keeping for a long time a photograph I had cut out of a magazine – lost subsequently, like everything too carefully put away…” (80).

“The Photograph does not call upon the past (nothing Proustian in a photograph). The effect it produces upon me is not to restore what has been abolished (by time, by distance) but to attest that what I see has indeed existed” (82).

“Mad or tame? Photography can be one or the other: tame if its realism remains relative, tempered by aesthetic or empirical habits (to leaf through a magazine at the hair dresser’s, the dentist’s); mad if this realism is absolute and, so to speak, original, obliging the loving and terrified consciousness to return to the very letter of Time: a strictly revulsive movement which reverses the course of the thing, and which I shall call, in conclusion, the photographic ecstasy.

Such are the two ways of the Photograph. The choice is mine: to subject to its spectacle to the civilized code of perfect illusions, or to confront in it the wakening of intractable reality” (119).

A mad image: The Photograph is an extended, loaded evidence – as if caricatured not the figure of what it represents (quite the converse) but its very existence. The image, says phenomenology, is an object-as-nothing. Now, in the Photograph, what I posit is not only the absence of the object; it is also, by one and the same movement, on equal terms, the fact that this object has indeed existed and that it has been there where I see it. Here is where the madness is, for until this day no representation could assure me of the past of a thing except by intermediaries; but with the Photograph, my certainty is immediate: no one in the world can undeceive me. The Photograph then becomes a bizarre medium, a new form of hallucination: false on the level of perception, true on the level of time…”it is not there…but it has indeed been” (115). [want to connect this to Latour’s ANT]

Claim of Some Doubt:

“Life/Death: the paradigm is reduced to a simple click, the one separating the initial pose from the final print” (92). [makes me think about the function and maintenance of archives]

3 Sources to Aid With Reading: This being my first encounter with Barthes, I would be interested in reading Mourning Diary (of his mother’s death); Sartre (vision of objects as certain); and Maurice Blanchot (post-structuralist French philosopher – influential on Barthes’ shift from structuralism to post-structuralism?) 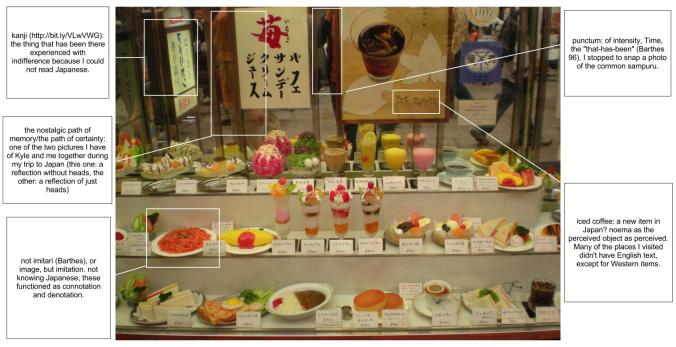 I took this photograph of plastic food models outside of a restaurant in Tokyo on my trip to Japan in 2011. These representations of food items offered, along with photos of food on menus, were my way of reading (living there at the moment, really). I could not read kanji or speak Japanese and I am a vegetarian, which complicated the basic task of eating. Traveling in a foreign place put special emphasis on maps and visuals and photographs on maps, because again, I could not read the kanji for the destinations of the bus or train lines, nor road signs, and could only communicate with people because of photographic aids in my maps and guidebooks. Although I was reliant on visual elements to experience the culture, the overwhelming amount of photos and images in places like Tokyo often became more white noise than aid. Accompanied by kanji (which became odd symbols of no linguistic meaning to me), or of icons/references I did not know, the very images that allowed me to interact could silence me in my tuning them out.

Summary: The photograph touches, has an effect, when it is withdrawn from its usual context of composition talk – technique, art, reality, etc.- to allow it to rise on its own accord into affective consciousness (55).

“I may know better a photograph I remember than a photograph I am looking at, as if direct vision oriented its language wrongly, engaging it in an effort of description which will always miss its point of effect” (53).

“What I feel about these photographs derives an average affect, almost from a certain training. I did not know a French word which might account for this kind of human interest, but I believe the word exists in Latin: it is studium, which doesn’t mean, at least not immediately, “study”, but application to a thing, taste for someone, a kind of general, enthusiastic commitment, of course, but without special acuity” (26).

“The second element will break (or punctuate) the studium. This time it is not I who seek it out (as I invest the field of the studium with my sovereign consciousness), it is this element which rises from the scene, shoots out of it like an arrow, and pierces me. A Latin word exists to designate this wound, this prick, this mark made by a pointed instrument: the word suits me all the better in that it also refers to the notion of punctuation, and because the photographs I am speaking of are in effect punctuated, sometimes even speckled with these sensitive points; precisely, these marks, these wounds are so many points. This second element that will disturb the studium I shall therefore call punctum; for punctum is also: sting, speck, cut, little hole – and also a cast of the dice. A photograph’s punctum is the accident which pricks me (but also bruises me, is poignant to me)” (26-27).

Accepted Claim:
“Last thing about punctum: whether or not it is triggered, it is an addition: it is what I add to the photograph and what is nonetheless already there” (55).

Claim of Some Doubt:
“Since every photograph is contingent (and thereby outside of meaning), Photography cannot signify (aim at a generality) except by assuming a mask…the mask is the meaning insofar as it is absolutely pure (as it was in ancient theater)” (34) (and the intermediary is by way of Death 31).

3 Sources to Aid with Reading:

Not sure of which texts, but Barthes references Nietzsche, Brecht (weakness of critical power of photography) , and Sartre (posture of existence)Post-class (Re)Focus: