For my material rhetorics independent study, Collin gave me an assignment to create a Cornell box out of any text or game. I selected Janet Murray’s Hamlet on the Holodeck to create a digital Cornell box that illustrates the “protean environment” of the computer as a representational media for multiform stories told by the agency of the interactor: “The interactor is not the author of the digital narrative, although the interactor can experience one of the most exciting aspects of artistic creation—the thrill of exerting power over enticing and plastic materials. This is not authorship but agency” (153).

<behind the screen> This was the first composition I have created using Pixlr, and I’m embarrassed to say only the second project I have made using photo editing and layering. </behind the screen>

I’m working on a material rhetorics independent study with Collin Brooke this semester which quickly turned from a reading list to a constellation of which gaming, hypertext, Peter Elbow, bots, byzantine art, and a world of 4D are all a part. For one of my projects, Collin asked me to locate a photo of a Joseph Cornell box and to invent the game for which that box/contents are the pieces. This was one of the most challenging|captivating things I have ever made.

I started with this Cornell Box 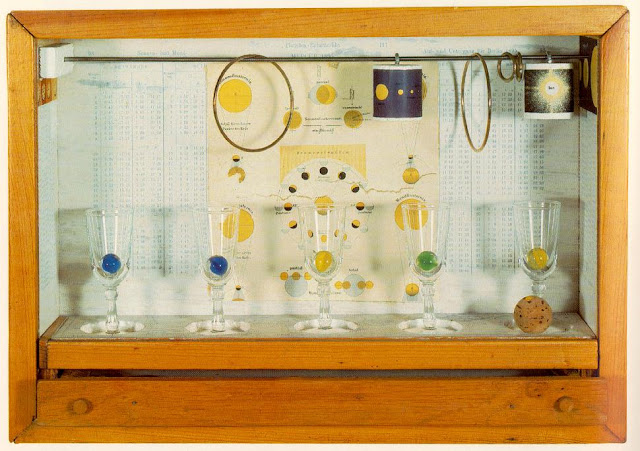 Earth can no longer sustain the human population. Extreme storms and unstoppable blights wreck havoc on what little crops are still able to grow in the barren ground. Inhabitants who have not been stricken by the pandemic of flu strand X, are starving. Mission: Perilous Planet is sending two teams of explorers to investigate a group of five biospheres they have deemed fit for settlement to flee the destroyed Earth. Your mission: give humanity a fighting chance.

Play space to determine effects of gravity and eclipses with each turn. The Eclipse Event bar has 13 spaces for Gravity Force rings to be moved across both forward and backward based on the roll indicated by the Gravity die. When a small and large Gravity Force ring meet over a planet, no actions can be taken on that turn by the player in control of the planet as a Flux Event has taken place. Each player controls a small and a large Gravity Force ring to keep from coalescing, but may also influence the occurrence of a Flux Event on the opposing player and planet.

Located on the Eclipse Event bar, these two markers are used to indicate what type of Eclipse a planet is experiencing during a Flux Event. The Lunar Phase marker (depicting phases of the moon) brings about natural disaster on the planet by disrupting planetary levels of gravity. The Solar Phase marker (depicting the sun) impacts the player’s ability to collect and process resources by disrupting the balance of night and day.

Rolls and resulting moves to be divided between small and large Gravity Force Rings:

1     move one notch backward; cannot be used on opponent

Each roll can be split between the small and large rings. If roll is being used to move opponent’s rings, only even rolls can be applied in an amount half the total.

numbered 1-6 to be allotted across actions:

Each number indicates one food or resource action. For example, rolling a 3 might be divided across the actions: collect 1 food, collect 1 resource, process 1 food. Refining and Processing can only be performed on food or resources in inventory from a previous turn and cannot be applied to food or resources collected in that turn.

Icon die is type of hardship to affect player, while corresponding number die is intensity of hardship in play

Mission: Perilous Planet only has eight weeks to establish living conditions for Earth’s resettlement. At the end of each round, the habitus orb is moved up on space on the Touchdown Timeline.

When the Habitus Orb reaches the end of the Timeline, each player must take stock of the state of their biosphere.

Players roll to decide who goes first; highest roll earns first turn and the choice of location for their biosphere in the orbital cups.

Each player gets to select a biosphere for resettlement. Each biosphere has strengths and weaknesses for its lifeforms that are affected by gravity and solar and lunar eclipse phases.

To set up the Eclipse Event bar, both Solar and Lunar Phase markers are pushed to the center. Each player takes a small and large Gravity Force ring and places them above their orbital cup that locates their biosphere. Each player gets the following dice:

Each turn, the player rolls each of their die except the Eclipse die, which is only rolled to determine the effects of a Flux Event when Gravity rings coalesce. After both players have taken their turn, the Habitus Orb is moved one space forward on the timeline.

When the Habitus Orb reaches the end of the Touchdown Timeline, the time for choosing the more hospitable biosphere is determined. The biosphere with the most stable colony conditions at the end of the development period receives the Earth population for resettlement. The conditions are determined by taking inventory of the environment on the Status and Inventory card.

This work is licensed under a Creative Commons Attribution-NonCommercial-NoDerivatives 4.0 International License.