Here is my talk I gave at 4Cs with Jason Luther and Becky Morrison. We created/circulated a zine to accompany our panel. We divided our panel into two sections, each taking turns.

(For my part, this is a messy first attempt at trying to relate: rhetorical ecologies, rhetorical carpentry, poeisis, materiality, techne and matereality.) 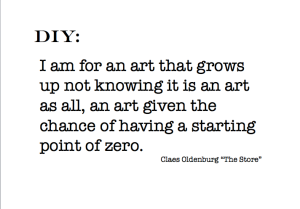 I am interested in materialities of composing—not just in crafting texts that are multimodal, but in the experiences of materiality. In Jim Brown’s “The Decorum of Objects”, he asks “is it possible to speak of rhetorical exchanges between objects?” (2). My interest in zines comes from their object potential – what their materials bring forth: they are compositions of assembled parts, intended to circulate, be taken up, and to be broken apart (sometimes to make other compositions). They are not texts unto themselves in structure or content. They juxtapose, de/recontextualize, subvert, enact kairos, radiate cultural and subcultural rhythms.
I see them as a space to explore the concept of rhetorical ecologies, which Jenny Rice considers a process that operates within a “viral economy” of social forces, “an ecological, or affective, rhetorical model that reads rhetoric both as a process of distributed emergence and as an ongoing circulation process. Ecologies work to make poeisis, the act of bringing something into being, articulable, traceable, vocal and visual.

I am currently teaching a research course, which is themed around a topic of inquiry of the instructor’s choice; mine being “The Alien Everyday”. The basis of inquiry is for students to make strange their encounters with objects – to look differently, to allow for the articulation of poeisis in their materials. Borrowing from Ian Bogost’s notion of carpentry, and the work of Nathaniel Rivers and Jim Brown [bringing this into our field] on rhetorical carpentry, students are creating research projects that articulate how things make one another and their worlds. This dwelling in materiality is an attempt at embracing the potential of objects, but what I want to better embrace is the potentiality of objects, between object, in dynamic interactions. I ask of students to interact with materials in direct contact and through tool extensions of eye, head, and hand: gathering objects, measuring, cutting, assembling, inevitably making errors and trying again, trying differently, with awareness of resistance, breakdowns, the simulation and evocation of objects that we cannot understand. What we care for is materiality: the affordances and constraints of materials, the contexts, histories, and technologies, that through combination and manipulation, make a composition. What I’m working to get at are methods for helping students encounter materials from a material, that is to say—a nonhuman, perspective—in material worldlings that open on to somethings – to see materials as potential. And while this may seems to stray from a DIY mentality of composing and publishing, I wish to explore how materials might persuade, communicate, and identify both with us and with one another in materially minded composing. I would like to explore materiality beyond the moments of composition, beyond person to object affective bonds in making, to potentiality in materials interacting with other materials (object, semiotic, contextual)—how they might compose, decompose, and recompose material worldlings (from Kathleen Stewart) – bringing new materealities into existence as they shift, fade out, break apart.

Potentiality in materiality cares for what becomes available when the connections that exist between ourselves and materials, and between materials are considered and perhaps estranged. The form, or materiality, of the composition may vary based on the at-hand circumstances, variances in contexts, but what is established is potential in its assemblage, its combinatory capabilities, its ability to break, its capacity to be cared for differently. Envisioning composition with interest in materiality troubles the artificial boundaries that separate what Jody Shipka describes as “the mental and the material, the individual and the social aspects of people and things interacting physically and semiotically with other people and things” (Jody Shipka). Composing becomes more action based: the looking for objects, the collection of materials, the tracing of resources, establishing connections, and crafting — text that leaves space for composing, recomposing, and decomposing in rhetorical ecologies. Texts move from passive or invisible intermediaries between ideas, to compositions of composites, of parts, that mediate further composing, that illuminate the fluidity, dynamism, and contingency of our complex web of activity-relations between us and other materials. Our means for making meaning and texts begin to fit our in flux material conditions, of which we are a part.

In “Weak Theory in an Unfinished World”, Kathleen Stewart cares for this flux, this dynaimicism of the cultural poesis of forms of living – objects as textures, rhythms, trajectories, and modes of attunement, attachment and composition. The point is not to think of materials as objects of value or understanding their meaning and representation just right but to wonder where they might go and what modes of knowing, relating, and attending to things are present in them. She describes potential as some thing throwing itself together into some thing. I wonder what does it mean to think of composition as the potential in some things thrown together into something?

I am asking my students to consider materealities in doing research as rhetorical carpentry. How might constructing a Rube Goldberg machine out of items common to a college dorm room make visible the complexity of things interacting in the clicking of a computer mouse to open a new tab on a web browser? Instead of reading an overview of the mechanics and technology and writing about what happens, students are simulating the experiences of the some things thrown together. In doing so, an inquiry of how a mouse works has elicited considerations of the necessary technologies and their design, questions of the relationship between human and nonhuman, and questions of the historical development of the mouse in relation to other technologies have arisen. For other students, how a clock works has unfolded to questions of how metaphors of time and devices of time influence us socially and culturally; and for yet another, creating a composite advertisement of an assemblage of found advertisements and cultural depictions of diamonds as emblematic of love in contemporary Western culture have juxtaposed money with demonstrations of emotional and ecological effects. These are research wordlings in which students are not only engaging with materials as a means of composing, but are uncovering and following traces of rhetorical ecologies that these materials—semiotic and object—exist with.

This work, for me, is getting at means of considering materiality unto itself; estranging the way we consider the wherewithal of materials. Relating materialty to rhetorical ecologies and carpentry are methods of letting materealities articulate themselves. What is materiality as some things thrown into relation with some things? In your hands you hold a something – an assemblage of things found, made, and remade, thrown into this some thing of a zine, a panel, of a conference, of hands and bodies that will disperse in their journeys in planes and vehicles back home to indeterminate and unfinished worldlings. I would like to make visible the ecologies that made this zine possible with the composition efforts of my comrades. To explore how a text was assembled to circulate in a dynamic space, a world of many wordlings as we are representatives of many institutions, interests, and networks. Matter in an unseen world is indefinite (Kathleen Stewart); what if we pause in materiality? What might we notice in these emplaced materials, tracing their into being, some thing different for each depending on the some things they encounter in simultaneously mundane and possibly complex material domains?